In September 2008, Sanaga-Yong Chimpanzee Rescue lost one of its matriarchs, beloved Dorothy. She was adopted mother to Bouboule, who has grown from a scared, lost orphan into a large, confident adult. Dorothy left behind her adopted son, her best friend Nama, her loving adopted family, and her devoted human caregivers. To this day, she is deeply missed!

The photograph of her funeral was featured in National Geographic, newspapers around the world and broadcast on Inside Edition twice, The View and several local news stations. The story below ran in The Telegraph, a UK publication. People around the world were struck by the emotion displayed! 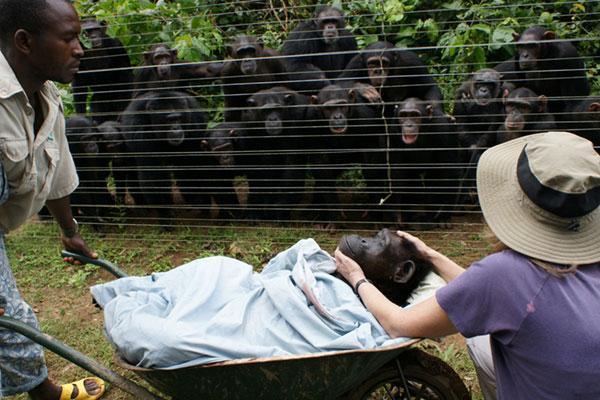 Chimpanzees’ grief caught on camera in Cameroon
A group of chimpanzees have been photographed seemingly grieving for the death of one of their own in Cameroon.
By Chris Irvine

More than a dozen chimps stand in silence watching from behind their wire enclosure as Dorothy, a chimp in her late 40s who died of heart failure, is wheeled past them by caregiver, Assou Francois and founder/director, Dr. Sheri Speede. The ceremonial gesture was intended to give Dorothy’s chimpanzee family the opportunity to grieve and honor their friend.

The chimps are from the Sanaga-Yong Chimpanzee Rescue Center in Cameroon. Locals from the village work as “care-givers” for the orphaned animals whose mothers were all killed for the illegal bushmeat trade. The photo was taken by Monica Szczupider, who was working at the sanctuary.

Speaking about Dorothy, Miss Szczupider, said the chimp was a “prominent figure” within a group of about 25 chimps.

“Chimps are not silent. They are gregarious, loud, vocal creatures, usually with relatively short attention spans,” she said.

“But they could not take their eyes off Dorothy, and their silence, more than anything, spoke volumes.”

The scene, which can be seen in the November 2009 issue of National Geographic, is reminiscent of the gorilla Gana, who grieved of the loss of her baby in her compound at Muenster Zoo in northern Germany. Gana fiercely held on to the corpse of her three-month-old baby Claudio until zoo keepers were eventually able to retrieve his body.

Scientists have previously discounted opinions of those who claim animals feel emotions as overly anthropomorphic. But a number of have also recognized that we must be anthropomorphic when discussing animal emotions.

Dr. Marc Bekoff, of the University of Colorado, previously wrote for The Telegraph: “That animals and humans share many traits including emotions is merely an extension of Charles Darwin’s accepted ideas about evolutionary continuity, that the differences between species are differences in degree rather than differences in kind. The seemingly natural human urge to impart emotions on to animals, far from obscuring the “true” nature of animals, may actually reflect a very accurate way of knowing.”

He has previously published observations of a magpie ‘funeral’ where a group of four magpies took turns to approach the corpse of a dead bird, before two flew off to return with a piece of grass and lay it down beside the body. He also claims to have seen emotions in elephants.