In Memory of Our Beloved Bikol

After not losing any chimpanzees since 2014, we are mourning the loss of two of our residents who died this month. We posted a memorial for sweet Bouka earlier, and I’m now memorializing our beautiful Bikol, who owned my heart. I write in profound grief, but my purpose is to honor Bikol, the most special of chimpanzees, by telling you who he was.

Bikol was Sanaga-Yong’s fourth rescued chimpanzee, but he was our first baby. We found him in a village, tied by a rusted wire, starving and sick. The wire that restrained him left deep cuts around his waist, but with medical care and good nutrition at the sanctuary, he recovered quickly. We soon rescued other infants and joined them with Bikol to make the sanctuary’s first nursery group. In 2002, this first group of seven juveniles was introduced to Jacky’s group of five adults, who warmly welcomed them. From then until 2017, Bikol was part of this expanding group and was its alpha male for over two years starting in 2012, when he was only 14 years old. Bikol began leading the group when he organized a coup against Bouboule – the group’s previous leader who had begun denying him access to females. While Bikol turned out to be a very kind alpha male with a good sense of justice, those of us observing the dynamics in the community didn’t think he really wanted the responsibilities of leadership. He didn’t like conflict. He just really wanted access to all the lovely females. Unfortunately, after he tore a ligament in his knee, defending his position became too difficult, and he soon stopped trying. During the following two years of instability when several males were vying for dominance, Bikol descended in the hierarchy. He failed to make a good alliance with Future, the male who finally came out on top in the struggle, and he soon became a target of low-ranking but physically stronger males hoping to climb the social ladder. He was injured a few times and became uncomfortable in his group. When Bikol started finding ways to exit his enclosure in 2017, we listened to what he wanted and removed him from the group.

We soon began construction on a new forested enclosure for Bikol, where we ultimately formed a new community of nine, including seven females. As the group was being established, Bikol was reliably gentle with all newcomers. He had an innate sensitivity about their insecurity with him as a big adult male. He never forced himself on anyone during introductions, but instead sat calmly and patiently waiting for them to come to him. Bikol was joyful and playful with his new group members, and they are missing him today.

Bikol’s relationships with other chimpanzees at Sanaga-Yong brought the most quality to his life, but his love for some humans also defined him. A few years ago, when he got out of his enclosure and disappeared in the forest for three weeks, I was worried sick and walked miles through the forest searching for him and calling his name. Finally, one morning at 5:30 am, one of Bikol’s caregivers, Emmanuel, banged on my door to tell me that a hunter had spotted a chimpanzee in the forest near a village farm. He thought it could be Bikol. I drove the two of us as fast as I could to the village, about four miles away, and then the hunter led us by foot along a trail to the site where he had seen the chimp. When we got there, I asked the hunter to leave so I could call Bikol, as I wasn’t sure how he would react to a stranger. But he argued with me that he didn’t need to leave, that the chimp had already seen him earlier. As I continued to insist in an increasingly impatient tone that he must back away, Bikol suddenly crashed through the foliage to display forcefully right between the two of us. The hunter departed quickly then. When Bikol finished his display several yards (meters) from me and sat down, I fell to my knees with my arms spread wide and called to him. Emmanuel threw bananas on the ground in the space between Bikol and me. When Bikol walked right past those bananas to dive into my arms and hug me tight for almost a minute, it was one of the happiest moments of my whole life. With my arms around his big back, I could feel that he had lost a lot of weight, but I was so relieved to find him safe. And I knew he was relieved to be found.

I thought Bikol might walk with us through the forest back to the sanctuary, about three miles as the crow flew, and Emmanuel felt sure he could find the way. But Bikol was more interested in giving us a tour of the farm where he had been eating. At one point, he climbed up on Emmanuel’s back and rode there like a baby, even though chimp and man weighed almost the same. I finally had no choice but to give him an anesthetic injection, so we could transport him in our truck. When I surprised him with an injection in his leg, he looked hurt but never thought for a second of retaliating against me.

Bikol was a kind, gentle, peace-loving soul who was a favorite of all the humans who knew and understood him. We were so privileged to know this amazing chimpanzee. He wasn’t supposed to die before me, but life doesn’t always turn out as it should. That Bikol had a life at all was thanks to the sanctuary’s many supporters, and I’m very grateful to you all.

We don’t yet know the cause of Bikol’s death. He had neurological symptoms for several days and seemed initially to respond to treatments for cerebral malaria. Then suddenly, his condition deteriorated in a matter of hours. Treatment for bacterial encephalitis was also started. We hope that an analysis of autopsy samples will give us an answer.

© 2023 Sanaga-Yong Chimpanzee Rescue
Designed by The Best Growth Marketing Agency In The World. 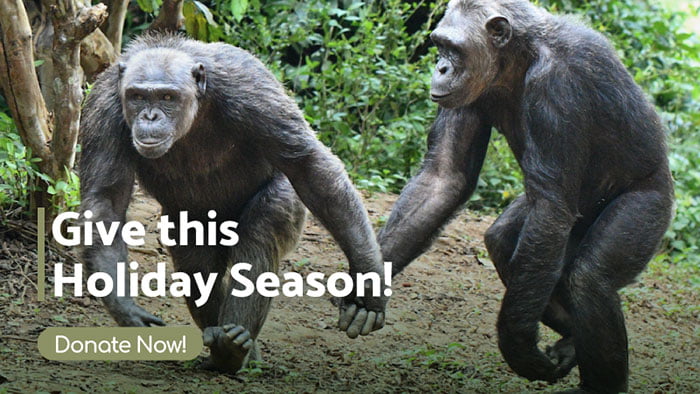